Skip to content
(703)765-0300[email protected]
Alexandria is a city in Northern Virginia, located just across the Potomac River from the national capital, Washington D.C. Downtown D.C. and the Pentagon are just a couple of minutes’ drive away from Alexandria. West End Alexandria along I-395 has a variety of high-rise condos and townhouses around both the Landmark area and the Mark Center. West End Alexandria is further enhanced by the fact that the Metro’s Blue line through here, thereby assuring a convenient means of transportation for its residents. About homes and condos for sale at the Blue Line. For more information or to set up an appointment call Stuart at (703)765-0300.
Franconia Road, once the means by which Virginia tobacco entered the port city of Alexandria, is now a bustling city road catering to millions of pedestrians on a regular basis. Franconia, throughout history, witnessed events such as Mosby raids, the birth of the first Virginia governor coming from the northern part of the state, and even became the home of Carrolltown, a flourishing community of African-Americans. Franconia Museum is at 6121 Franconia Road, Alexandria, VA 22310. Franconia Museum is a great place to learn more about the history of Franconia. With a band of volunteers fueling its operations and the regular exhibits sponsored by the museum in local hotspots, the Franconia Museum is one of the uniting factors of its surrounding community, serving to educate its citizens and enrich their cultural and historical knowledge. To learn more about the Museum, you can join their many events, including regular gatherings where guests are encouraged to tell their stories and learn of the stories of others, and of course, their celebration of Franconia History Day during the fall. For more information on Franconia Museum and their hosted events, you can contact the following phone number: (703) 971-7943. Carlyle Towers is located in the Carlyle District not far from the United States Patent and Trademark Office in Alexandria VA. This area is served by Yellow and Blue Line trains with stops at the Eisenhower Metro Station and King Street Station. ﻿For more information or to set up an appointment call Julie at (703)765-0300.
Ronald Reagan Washington National Airport, formerly Washington National Airport, is on the Potomac River across from Washington DC. Along with Baltimore Washington International and Dulles International, Reagan National is one of three major airports serving the Washington Metro area. Reagan National is easily my favorite of the three airports for a number of reasons. Dulles and BWI are massive sprawling airports with shuttle buses and mobile lounges. Reagan National barely has enough room for the runway. I always like smaller airports. They feel like they are scaled to human beings. There is plenty of security at National, but it seems to move along more smoothly than Dulles or BWI. Dulles and BWI are outside the Beltway at the periphery of the Washington Capitol Area.  Reagan National is at the heart of everything, wedged at the confluence of DC, Alexandria and Arlington.  For me, it's a long drive just to get to BWI or Dulles, but Reagan National is here, and it's accessible by Metro. Reagan National is a station on both the Yellow and Blue lines. Extended parking is available at Dulles or BWI, but on the shuttle bus, the ride from the parking lot to the terminal seems like a mile or more.  At Reagan National, extended parking is at my house.  Because instead of taking a shuttle, I can take the Metro to the airport. The runway is short at Reagan National, and it launches planes up over GW Parkway and at the Washington Monument, requiring a steep climb and a hard left on take off. Some folks find this terrifying, but I have to admit I love it.  I know it's a safe path, because planes take off here day and night, so I sit back and enjoy the abrupt take-off and turn. Reagan National is open 24 hours a day 7 days a week, although many ticket counters and restaurants in the airport close during off-hours. Reagan National is located within the Commonwealth of Virginia, but it has a Washington DC address to identify the airport's location more easily for travelers. The Perimeter Rule and the High Density Rule affect flights at Reagan National. Under the Perimeter Rule, nonstop aircraft flights are limited to a range of 1,250 miles or less. In 2000, Congress permitted the FAA to 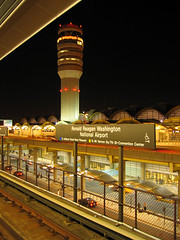 allow six round-trip flights to points outside the perimeter. The High Density Rule (or "Slot" rule) limits the number of landings or takeoffs allowed in an hour. The rule affects Reagan National because of the Airport's limited airfield capacity. Reagan National is located in Arlington County near/in Crystal City. It is most easily accessed from the George Washington Parkway. There are a good many condos and homes in the Crystal City area and they're all just a metro stop away from Reagan National.  The take-off and approach to Reagan National is down the Potomac, so that area residents get very little noise or fly-over from the jets at Reagan National. It would be our distinct honor and privilege to help you purchase real estate in Virginia. We'd love the opportunity to show you about why our clients rave about our service.

We have the experience, talent and tools to sell your real estate fast, and for the best price. Think of Nesbitt Realty for buying, selling, renting and property management.