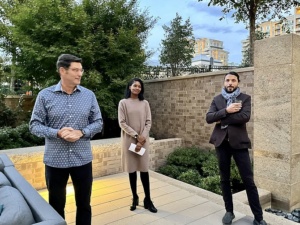 According to The Connection Newspapers, "Robert Goudie is board chair of the nonprofit organization Greater Reston Arts Center (GRACE), rebranded as Tephra Institute of Contemporary Art (Tephra ICA). Goudie expressed pride in the work done by staff in the space. He said that three years ago, the organization had no idea whether this satellite gallery would work. "Boston Properties was nervous about it. We were nervous about it. The whole idea was to try to introduce people to this concept of living with art," he said. It worked. Jaynelle Hazard, the executive director and curator introduced Limauro. She said his mixed media works explore migration and migrant identity issues, nationalist narratives, gun violence, and other social issues." As per The Connection Newspapers, "Limauro adapted the technique of painting dates in red from antique Roman murals. "Those are the dates of the real historic floods in our region," Limauro said. Finally, Limauro employs gold leaf in his work. He grew up in Rome, where gold leaf embellished panel paintings, backgrounds, and frescoes. Tephra ICA at Signature is located at 11850 Freedom Drive in Reston. The gallery is open to the public for free, Tuesday through Saturday, 11 a.m.– 5 p.m."