Skip to content
(703)765-0300[email protected]
October 29, 2021October 29, 2021Maryam
Capital One Hall opened earlier this month with star-studded concerts in Tysons, Virginia. This weekend, it kicks off Broadway musicals with “Waitress” on Friday through Sunday. Based on the 2007 film by Adrienne Shelly and adapted by Jessie Nelson (book) and pop star Sara Bareilles (music, lyrics), the 2016 Broadway show earned four Tony nominations, including Best Musical, and might have won if it weren’t for a little show called “Hamilton.” 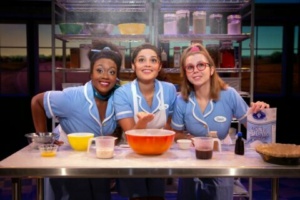 According to wtop.com, "I had never seen ‘Waitress,’ besides watching the Tonys where I saw Jessie Mueller take my entire soul away,” Salters said. “It was one of those things in the hubbub of everything that I had never seen. I had never listened to the soundtrack all the way through. … I got to see it for the first time with Sara [Bareilles] on Broadway … a couple months ago.” She plays Becky, a friend and colleague of the main character, Jenna, a small-town waitress stuck in a loveless marriage until a pie-baking contest offers a fresh start." As per wtop.com, "The songbook slaps right out of the gate with “Opening Up” on multiple levels: (a) opening up the show, (b) opening up the restaurant, and (c) opening up Jenna’s emotional arc. “You get to see the waitresses for the first time like, ‘OK, let’s open this bad boy up, let’s open this diner up,'” Salters said. “All three of us start singing in unison at first, then we break into our first harmony. Then you get to see all of the ensemble cast come flooding in. You get to see the life of the diner, people coming in and enjoying Jenna’s pies." We have the experience, talent and tools to sell your real estate fast, and for the best price. Nesbitt Realty has received numerous awards and recognitions for client satisfaction because we get results that make our clients happy.