Tucked away in the Cherrydale neighborhood of Arlington among a cluster of oak trees, is the aptly named Oak Grove Park. 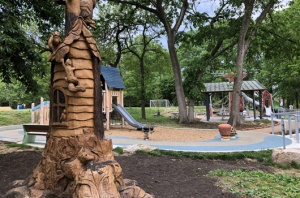 For many years, Oak Grove Park had contained simple children’s play structure, a dated picnic table, and open space. But, after several consultations with the communities children and adults, the park recently underwent some major upgrades to include a tot lot and a play area for older children with lots of fun and exciting play equipment including a huge climbing structure for the older kids. The playground also has a mulch surface so the kids don’t hurt themselves.

The park also has an improved picnic shelter, a  paved 1/5 of a mile loop, a soccer-playing field that’s mostly used by kids soccer leagues, a water fountain, many new trees, and a bio-retention for stormwater management. But the main attraction of the park is a sculpture of a tree with animals and windows.