M&T Bank opened its newest branch in Reston and marked the event with a ceremonial ribbon-cutting. The event took place on January 22 and more than 50 individuals attended including members of the bank’s regional senior leadership and Greater Reston Chamber of Commerce, Supervisor Walter Alcorn (D-Hunter Mill) and other guests. 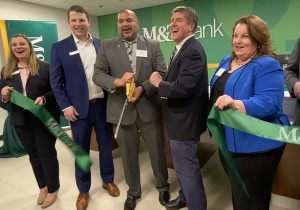 According to Reston Connection, “Located at 1886 Metro Center Drive, the 45,000-square-foot bank is 1 block from the current western terminus of the Washington Metro Silver Line, the Wiehle–Reston East station in the new transit-oriented, mixed-use, urban center. “What I’m excited about our new branch in Reston is the improved location. We are very accessible to the community,” said M&T Regional Manager for the Northern Virginia Region John D. Murphy Jr.”

As per Reston Connection, “In the latest round of the annual Greenwich Excellence Awards, M&T Bank ranked among the nation’s top small business lenders, according to Senior Public Relations Manager at M&T Scott Graham. The bank’s Washington D.C. Small Business District ranked No.1. “M&T Bank is the number one SBA (U.S. Small Business Administration) lender in the Washington D.C. SBA District based on a total number of loans – 186 loans for $33.2 million in the SBA 2019 fiscal year. (The Metro Center branch) will cater to business clients. Several business banking relationship managers will sit at the new Reston branch, which will operate as a business banking center. These professionals have a deep understanding of the Reston community,” said Graham.”