Westgrove is a quiet community along the Potomac River in Fairfax County VA. They are found along broad and curving avenues between Fort Hunt Road and the George Washington Parkway near Westgrove Park. Westgrove mostly features large homes that are competitively priced. This is a well-established community that continues to attract interest from buyers looking in the Alexandria area. 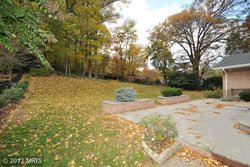 Westgrove evolved out of a large colonial land grant of some 471 acres of prime riverfront property that was granted to Roger West in 1789. Back in the early years, it was the site of the West Grove plantation which was burned to the ground during the Civil War. Next-door Villamay dates back even further, to a 598-acre parcel granted to Thomas Sanford in 1703. These two tracts of land extended inland from the river and its accompanying greenbelt and into the hilly surroundings. Over time, the land changed hands numerous times, both through the natural process of generational change and through sales.

But apart from some long-ago farmhouses and summer estates, most of which have long since faded away, Westgrove didn’t begin to residentially develop until the post-World War II era. A number of homes for sale were built on large lots from the late 1940s through the mid-1950s. The construction trend migrated to next-door Villamay in the late 1950s, continuing through the 1960s.