Skip to content
(703)765-0300[email protected]
March 29, 2013January 5, 2016Will Nesbitt
The Potomac River is located on the east coast of the United States, and runs through Maryland, Virginia, West Virginia, and Washington, D.C. before it empties into the Chesapeake Bay. It is over 380 miles long and wider than 11 miles at its widest point. As it passes through Washington DC, the nation's capital, the Potomac passes the Washington Monument and the memorials of Jefferson, and Lincoln. Many consider the Potomac to be one of the most beautiful and bountiful rivers on the East Coast. The river is also widely regard its historic, scenic and recreational significance. Among the many who loved the Potomac was George Washington, who worked as a surveyor at many points along the banks of the river. George Washington's mansion at Mount Vernon is on the Potomac. The Potomac's source is a small spring at the Fairfax Stone in West Virginia. From there, the river gathers many tributaries, winding through the mountains and valleys of Appalachia. One of its most dramatic turns occurs at Harper's Ferry where the Shenandoah meets the Potomac. 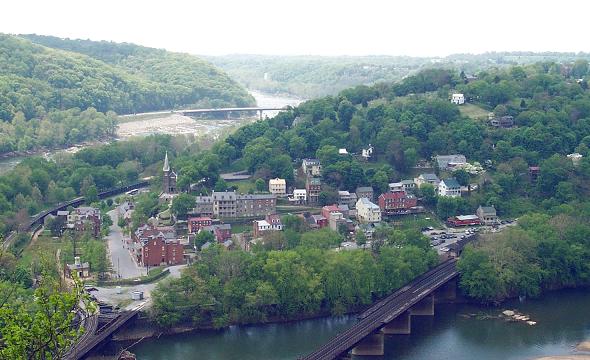 At Great Falls, the Potomac tumbles down from the Appalachian Highlands to the sandy soils of the Atlantic Coastal Plain.  Visitors from the colonial era to the modern era relish the views here. Today visitors at Great Falls will not only marvel at the cataracts, but also the engineering efforts of those who sought to fulfill George Washington's dream of connecting the Chesapeake Bay to the Ohio River. The C & O Canal was only operational for a few short years, but remnants of the system are still functional at Great Falls Park.

Finally, the river flows almost 400 miles widening to over 11 miles as it reaches the Chesapeake Bay on the long, low, and barren peninsula named Point Lookout, Maryland.  Before the US Civil War, Point Lookout was home to a few hotels and boarding houses, but during the war it was converted into one of the largest and worst of the Union prisoner-of-war camps.

Fishers, anglers, boaters, sailors and kayakers all enjoy the Potomac.

The Potomac River has a watershed of 14,670 square miles including tributaries in Maryland (the Monocacy, Savage, and St. Mary's Rivers); in Virginia (the Shenandoah and Occoquan Rivers); in West Virginia (the South Branch and Cacapon Rivers); in Pennsylvania (Conococheague and Antietam Creeks); and in Washington DC (the Anacostia River). The Potomac cradles forests, battlefields, farmlands, mountains, parks, and cities. It is known to many as our Nation's River.

If you're searching for a home or condo in Northern Virginia with a view of the Potomac, contact Will Nesbitt with Condo Alexandria.